Ty Laurie, founding partner of Laurie & Brennan, LLP, practices construction law nationwide. He is a fellow of the American College of Construction Lawyers, fellow of the American Bar Foundation, and the 2006-07 chair of the American Bar Association Forum on the Construction Industry. His representative matters include high-profile sports facility disputes, capital improvement and replacement projects for hospitals and medical facilities and construction of skyscrapers. Mr. Laurie has served as construction counsel or provided construction law advice for several Fortune 500 companies.   Besides trying cases to verdict, he counsels on project delivery methods, negotiates contracts, assists in the procurement of insurance, provides critical dispute avoidance services and advocates in mediations and arbitrations. 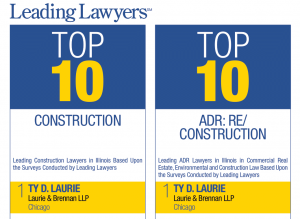 Mr. Laurie is consistently ranked among the top lawyers in construction law. Best Lawyers named him the 2013 “Lawyer of the Year” in Chicago Construction Law.   Chambers USA: America’s Leading Lawyers for Business gave him a “tier 1” rating for Illinois construction lawyers, its highest individual rating. Expert Guides named him as one of the top 30 most pre-eminent lawyers in construction law in the USA in Best of the Best 2012.  Leading Lawyer Network ranks him as the Number 1 Top Construction Lawyer in Illinois in 2019 & 2020, Number 1 Top Lawyer in the Lawyer Neutrals Construction category in 2019 & 2020, the Top 100 Leading Business Lawyers in Illinois, and the Top 100 Leading Lawyers in Illinois.   He is consistently included in Best Lawyers in America, Illinois Super Lawyers, PLC Which Lawyer?, The International Who’s Who of Construction Lawyers, The International Who’s Who of Commercial Mediation, and Who’s Who Legal: Illinois.   Martindale Hubbell rates him “AV,” the highest rating available, reflecting pre-eminent legal ability and the highest professional and ethical standards. The PLC Which Lawyer? Yearbook 2009 lists him as “highly recommended,” commenting that “he is well regarded in the market for advising on project delivery methods, contract negotiations and dispute avoidance.” Mr. Laurie and his team were recognized in 1999 by Sears, Roebuck & Co. with the first Sears Construction World Class Partner Award.

In addition to his advocacy work, Mr. Laurie is a nationally renowned mediator and arbitrator.   Mr. Laurie is an American Arbitration Association (AAA) and International Mediation Institute (IMI) certified mediator and AAA-certified arbitrator for over 20 years, and has provided neutral services around the country on all types of construction disputes.   He is a AAA Master Mediator and on its distinguished Mega Project Panel of Arbitrators.   He is recognized as a member of the National Academy of Distinguished Neutrals, and he is a fellow of the American College of Civil Trial Mediators.

Mr. Laurie has a national reputation for his advocacy and neutral practice of construction law. His representative matters include: the multi-billion-dollar multi-building development in downtown Manhattan at Ground Zero to replace the World Trade Center; The Chicago Spire development, projected to become the tallest building in the Western hemisphere as well as the tallest all-residential building in the world; Lincoln Financial Field, the home of the Philadelphia Eagles; and the historic $600 million reconstruction of Soldier Field. Projects also include Arlington Park International Racetrack, Rush-Presbyterian-St. Luke’s Medical Center; Northwestern Memorial Hospital, and Sears retail outlets nationwide.

PERSONAL
Ty is still basking in the glory of the Cubs World Series win--Go Cubs! Ty also enjoys traveling, reading, golfing, and skiing with his wife, two boys, and friends.

“Ty was a highly effective mediator on a multi-party case involving a public owner, the owner’s design team (and E&O carriers), the contractor, the subcontractors and their respective carriers. As a result of Ty’s outside of the box approach, the parties were able to get the matter resolved without ever entering into formal litigation. It was one of the rare instances where the major parties were all pleased with the result. This was a prime example of how mediation can be a highly effective means of dispute resolution that ultimately saved the parties thousands (if not collectively, millions) in legal cost.”

“Ty Laurie is the most skilled construction mediator with whom I have ever worked. We recently settled a multi-party complex case that could have taken years to resolve. Instead, we agreed to mediate with Ty. He had a thorough and technical understanding of the issues at stake, and is an extremely careful reader and listener. He knew how to apply pressure when needed, and because it was coming from his informed perspective, his guidance was all the more effective. I will continue to call upon his services every chance I get.”

“There were five parties in a complex construction dispute that had gone on for 10 years. The issues were many and the documents numbered in the thousands. When Ty Laurie arrived on the first day he had a firm understanding of all of this. He worked skillfully and tirelessly for the next two days to achieve a resolution with four of the defendants – a feat that no one had thought possible. Ty put his heart into this. I recommend him without qualification.”

“Ty has always been extremely well prepared for the mediations where I have worked with him. I have seen Ty help resolve several complex, high-dollar multiparty construction disputes that many had thought impossible to settle. Ty’s only weak spot is an unhealthy devotion to bad baseball teams.”

“Ty did a great job settling a multi-million dispute involving complex payment and quality claims on an airport runway project. Ty was prepared, organized, creative and relentless in this three-party, 2.5-day mediation. I would highly recommend Ty as a mediator for any difficult construction dispute.”

“We had what we believed to be an irreconcilable $25 million plus construction dispute headed for a five-week jury trial. Mr. Laurie, agreed to act as mediator, on short notice. He brought the two sides together and settled the case which both lawyers were convinced was headed to trial. Ty was firm and energetic and he refused to give up on the process, ultimately his tenacity and familiarity with the subject matter (constructional law) caused the matter to settle to the great relief of the clients.”

“I’ve used Ty Laurie as a mediator on many contentious construction cases that, frankly, I did not think would or could settle. Ty’s skill, knowledge, and experience proved my skepticism wrong. He is exceptionally quick in absorbing both the nuances and essence of a complex case, and he utilizes many creative approaches to resolve obstacles to settlement. Given his credibility, efficiency, and effectiveness, I think his services are an excellent value.”

“Ty brings a wealth of construction knowledge and litigation experience to the mediation process. He enjoys the support of the Bar as an impartial neutral, and has an engaging personality which creates the right environment for resolution.”